The United States Navy came into existence during the American Revolution when there was a need to match the Royal Navy.  The first vessels launched were in 1797, the United States, the Constellation, and the Constitution. Then, in 1825, President John Quincy Adams urged Congress to establish a Naval Academy “for the formation of scientific and accomplished officers.” His proposal, however, was not acted upon until 20 years later. In 1850 the Naval School became the United States Naval Academy, where a new curriculum required midshipmen to study at the Academy for four years and to train aboard ships each summer.  That format is the basis of a far more advanced and sophisticated curriculum at the Naval Academy today. As the U.S. Navy grew over the years, the Academy expanded.  The campus of 10 acres increased to 338.  The original student body of 50 midshipmen grew to a brigade size of 4,000.  Modern granite buildings replaced the old wooden structures of Fort Severn. (Naval Academy website, July 2018)

Now in 2018 and at the Brigade Sports Complex in Annapolis, Maryland, Chris Garner, head coach of the Naval Academy’s men’s tennis program, reflects upon his time as coach and specifically as his time as coach at the Milwaukee Tennis Classic.  He notes the local support behind the event: “It’s not just where you come and go out and play.  You can really feel how long the tournament has been around.  The community really gets behind the tournament, and you can feel the commitment.” (Garner interview, July 2018)  From when the Milwaukee Tennis Classic was in the team format in 2016 to the renewed individual format of 2017, Garner co-led his Midshipmen to the tournament. The other leader of the team was Associate Head Coach, John Moreland, who is entering his eighteenth season as associate head coach of the Navy men’s program in fall of 2018. In his recollection of the Milwaukee Tennis Classic, Moreland writes, “I attended the Milwaukee Tennis Classic for the first time last year.  It was a wonderful experience, which started with the recognition of our player Aries Wong and being able to see him give his reflections on his time at Navy.  The level of competition was very good, and it was a great opportunity for Aries to play against top level competition.  He played a very tough second match against Toby Boyer from Nebraska, who was the singles finalist in the Central Region.  This match provided Aries confidence heading into his senior season.  This exposure to a higher level of competition and speaking about their experiences as Naval Officer candidates is so important in the development of our players both on and off the court.” 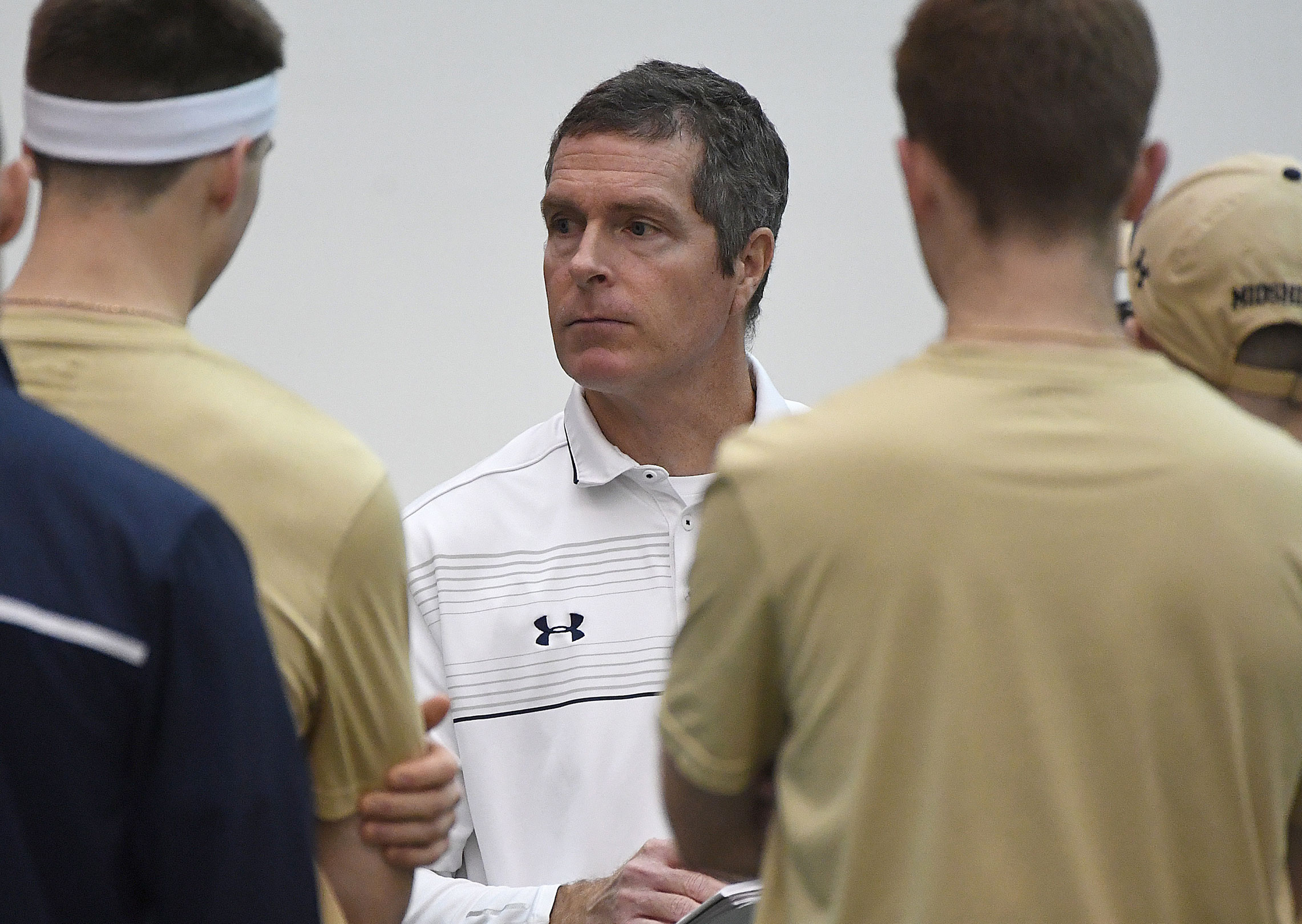 Entering his fifth season as head coach at the Naval Academy, Garner has seen some success at the helm of the program. This past May 2018 he was named ITA Atlantic Region Coach of the Year.  In addition to the regional award, he captured Patriot League Coach of the Year this past season of 2017-2018 and 2015.  In several of his seasons, Garner led the Mids to the championship match of the Patriot League tournament.  At the Naval Academy, there is a sort of uniqueness to the students involved in coaching these student-athletes.  Being a coach is “a chance to work with young people who are heading into adult life, and you’re doing a lot more than tennis when you are a coach.  You feel responsibility to guide them with certain life lessons- camaraderie, empathy to other people. As a coach you want to guide them to do the right thing after they leave and watch them grow and lead others which will benefit others.” (Garner interview, July 2018) Moreland, the 2009 Intercollegiate Tennis Association Northeast Region Assistant Coach of the Year, comments on coaching in the “patriotic tradition:”  “I arrived at Navy in August of 2001 after applying to Navy and turning down my appointment.  Shortly after my arrival the events of September 11th occurred and changed the world, so I decided to do my “duty” and help train the next generation of war fighters. This is important to me as my grandfather served in World War II as a Marine in the Pacific, and my father served in the Air Guard during Vietnam. This family tradition of military service helped shape my desire to coach at Navy and combine two of my passions, service to country and coaching. 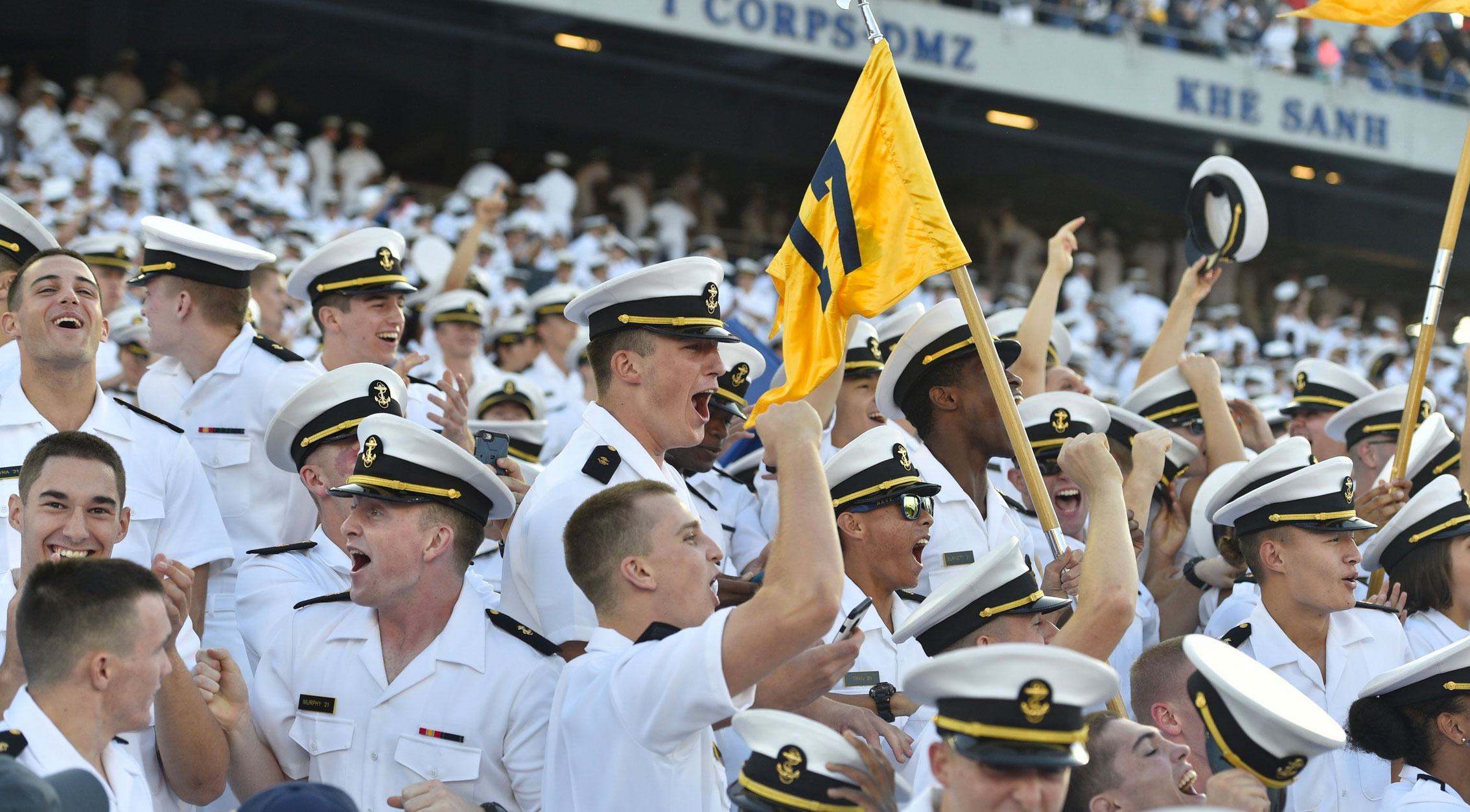 Coaching at the Naval Academy is such a privilege, and every day I am thankful for the opportunity to work with some of the nation’s top student-athletes.  I know that each young man we have on our team has a desire to serve his country.  Also, we are training the next generation of military and civic leaders, and I take this as a very big responsibility.  Every day presents a new opportunity to help shape these young men and make a difference in our country and around the world.  After 17 seasons the most rewarding part of my experience is seeing what my former players have gone on to do after their time at Navy.” (July 2018)

Among some of the players that have benefited by the coaching of Garner and Moreland is sophomore Andrew Ton. This past season, 2017-2018, Ton, as a freshman, received Patriot League Honors, being named the rookie of the year and player of the year for the Patriot League.  He and his partner, Aries Wong, also earned the league’s doubles team of the year.  (Ton was invited to the Oracle ITA Masters which takes place in Malibu, California at the same time as the Milwaukee Tennis Classic). Among some of the schools in the Patriot League are the Navy, Bucknell, Lehigh, Army West Point, Boston University, Holy Cross, American, Loyola-Maryland, Lafayette, and Colgate. Garner had a successful season in his inaugural season of 2015 where “he guided the Mids to an overall record of 20-11, the Patriot League Tournament title, and a return to the NCAA tournament.” (Naval Academy men’s tennis website, July 2018)

Before assuming the helm at the Naval Academy men’s tennis program, Garner gained valuable experience in several other coaching arenas: in the Division III arena at Amherst College and at Colorado and Ohio State University.  In 2014 he led the team to the Amherst programs’ second NCAA (DIII) championship title in four years.  He also “guided the Lord Jeffs to an overall 199-43 (.822)-134-16 (.893) over his last four seasons-and to at least the semifinal round of the NCAA Tournament in five of his years.  Amherst won NCAA crowns in 2011 and 2014, advanced to the finals in 2009 and 2010, and won the third place match in the 2013 edition of the tournament.  The Lord Jeffs also reached the quarterfinal round in the 2012 edition of the event, which gave Garner a record of 24-4 in six seasons of NCAA Tournament play…” (Naval Academy men’s tennis website, July 2018)  Moreland had assistant coaching stints at Marietta College in Marietta, Ohio as well as Washington College, his alma mater, and then as head coach at St. Mary’s College before arriving at the Naval Academy.  When looking at the number of All-Americans that they produced, “[n]ationally, Garner’s players totaled 22 ITA All-American accolades.” (Naval Academy men’s tennis website, July 2018)

Speaking of All-Americans, Garner himself knows what it means to be named All-American. University of Georgia stand-out earned All-American honors early on in his collegiate career.  With having so much success as a collegiate player, Garner left the University of Georgia in the late 1980s and decided to take on the professional tour.  In 1991 he reached his highest ranking of 120 in the world and also advanced to the Round of 16 at the Australian Open while beating several top players on the tour. Playing on the tour “gave me life experience that I can pass along to my team. Travelling around the world gave me perspective on life, and I got to see the world. I also learned how fortunate I was to be in the United States.  Being on the tour, I was appreciative of the opportunities and had a chance to train with guys who were number one in the world.  They really were exceptional people to be around.” (Garner interview, July 2018) 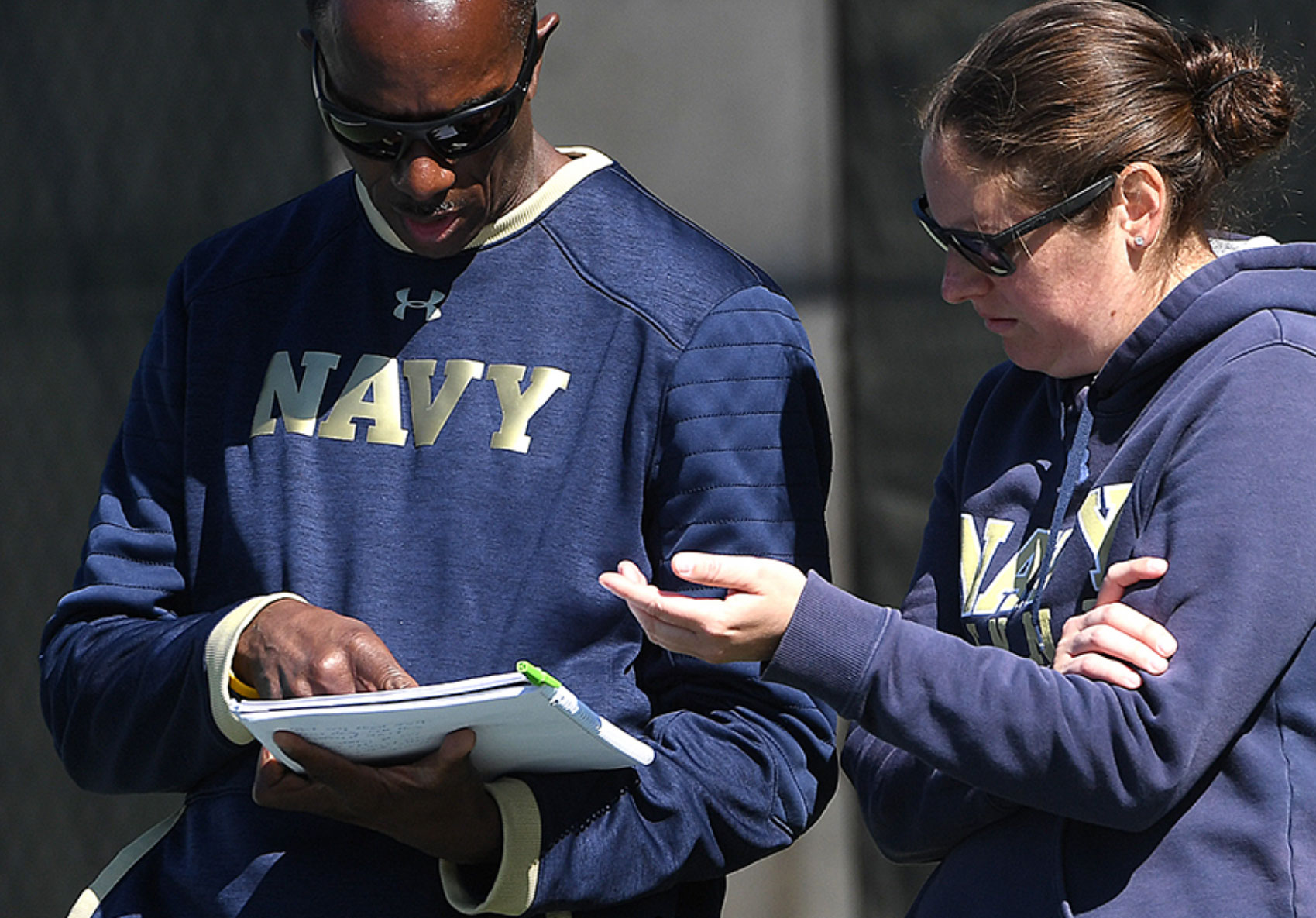 Among the highlights of his coaching career, Garner mentions that returning to school to finish his degree in sociology from the Ohio State University in 2007 topped the list. “I really know how important academics are to a person’s future.” (Garner interview, July 2018) At that time, Garner was the assistant coach under Ty Tucker.  At that moment the Buckeyes were undefeated in Big Ten Conference play at 26-0. The Ohio State men’s tennis team at the time that he coached also advanced to the quarterfinal round of the NCAA Tournament both of the seasons he was there, ending with rankings of five and three by the Intercollegiate Tennis Association.  “The Ohio State University is the best program in the country on a consistent basis.  What Ty Tucker has done is remarkable.” (Garner interview, July 2018)  When asked about tips to give to up and coming coaches, Garner points to the top tennis powerhouses in the country. He notes Wake Forest and Ohio State and how far they have come. “The tennis powerhouses have another level of passion and work ethic. Coaches travel around the world to recruit players.  A successful program creates a culture where the program allows tennis to grow and to allow for the players to have a successful experience.  The coaches have to be willing to put in the time to take the program to another level.  As mentioned previously, coaches need to recruit on a global scale and be able to generate revenue for the program.” (Garner interview, July 2018)

One interesting aspect of coaching: rivalries. On April 21, 2018 the Army and the Navy duked it out once more in their annual Star match.  After losing the doubles point, the Navy rallied to win four of the six singles matches to clinch victory of one of the oldest rivalries around, winning 4-3. “Every year something notable happens (when speaking of the Army-Navy rivalry). You can just feel the emotion as if it were a national championship match.  In one of my first matches at the Naval Academy, the Army smoked us, and I learned from it and prepared better for it in the future.  I’ve been involved with some incredible rivalries.  For seven years I was a part of the Amherst College vs Williams College, for two years I was a part of the University of Michigan vs the Ohio State University rivalry and now the Army vs the Navy.” (Garner interview, July 2018)  The student-athletes at the Naval Academy must take on academics as well as military training. Garner thinks of his student-athletes and comments that being at the Naval Academy “allows you to grow at a different rate than other places.” (Garner interview, July 2018)

Garner and Moreland look forward to coaching at the Milwaukee Tennis Classic again this year.  They will look to send one to two players from the Yard to battle with the best from across the country on the clay of Town Club this late September